Past and Present: Boys vs. Girls

At what point does the great divide take place between males and females? Well, apparently around age five. I never would have believed it myself before teaching for a couple of years and having kids myself that some of it was inate. I just thought it was mostly societal influence.


I mean, all through childhood they divided us up into boys and girls lines and activities; and steered us to separate boys and girl toys and colors, even. And yes this still goes on today, and I thought I've been pretty good at not making that distinction for my son. Because, who cares if he thinks pink and doll houses are cool? 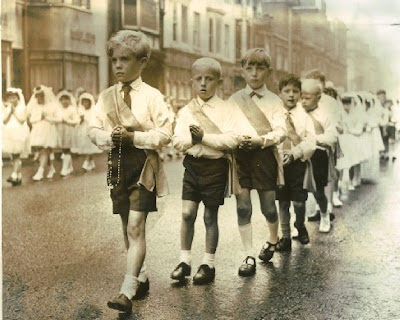 Plus at almost any adult party I've been to, the men end up in one room, and the women end up in another. STRANGE, but true! :) And if the party has kids invited, whose "side" do you think the kids end up on? I dont think I even have to answer that question. It makes for horrible adult conversations and lots of chaos. 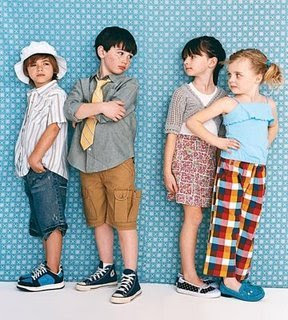 Just in the last couple of months or so, my son's been saying things like, "Barbie's are for girls" and refusing to go in the "girls" toy aisle at Target, instead running to the Leggos and Star Wars. I think to myself, where is he getting this from? Yet still, when playing with other girl pals one-on-one, he will do imaginative play with their Barbie's or dollhouses etc.


At a recent kid's party we were at, my son was following around a group of four female 5 or 6 year olds, asking if he could "come along". Here's what I overheard, as the spokesperson for the group said "No, go away, stop following us. No boys allowed. Besides, she doesn't like you because you popped her balloon..."


So what did my normally ultra-sensitive boy do when he heard this? Did he come crying to me? No. He just kept following them around, annoying them all the more.

My niece and nephew will be 2 in a few weeks. I used to think that gender habits were taught.

But with the ton of toys they have that are all mixed together, each chooses and plays with gender specific toys. The boy loves cars/trucks and motorcycles and books. The girl loves play figures/dolls, animals and puzzles.

While books and puzzles are not gender specific, it just shows each has their own preference and I think they were born with it.

I haven't seen the stage of gender separation. Your son sounds so cute following the girls around, he just wanted to be included.

After 2 boys (ages 7 and 9) who tend to isolate themselves from the girls in general (but play with them on the street, in the specific), my daughter has me completely thrown.

She has cat fights with her 2 closest girl friends, she doesn't want to share and acts all put out by her girlfriends when they want to play something other than "house" or "sisters" (same game, different name) and she definitely has a way of getting under my skin that her brothers never did. Is it innate? Is it learned (I'm pretty sure not by me)...who knows. I'm just busy waiting for her to turn...ummmm...30? (Am hoping all such behaviors will have ceased by then!!).

This is too funny because it's one of the key themes we're working into our book as we revise. Boys vs. Girls, the battle rages on.

Funny and true. Those girls are going to wish they were nicer to him in a few short years. :)

My boys are 11 and 7, and I do think having that older, same gender sibling put an earlier influence on my youngest. Also, we live on a street dominated by boys. It's all boys, no girls, so the play is always geared toward that boy interest. When there was a little girl who lived here, she was the same age as my oldest, and she'd come over to see if he could play and they would head out to our backyard. Their play was kind of a mish-mash of gender roles, and it was fun to watch. Then...always there was a then...one of the neighbor boys would come over and you could see the gears changing in my son's head, and the little girl would soon grow so frustrated of the interloper and his desire to play strictly 'boy games' that she'd head home.

I think the line is a little less blurred now, as parents raise boys to help out around the house and girls to learn to mow the lawn and change the oil in their cars. But there's still a divide...and kids know it even if parents don't teach it.