Writer sisters, Lisa and Laura, also known as Lila, put a challenge on their blog yesterday asking fellow writers to pay it forward by writing a review for a fellow writer. 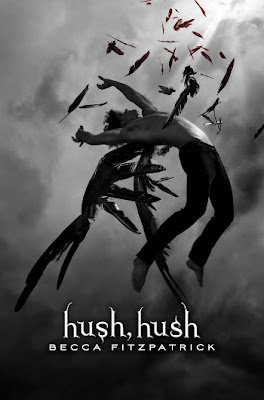 To my great surprise I found a Kindle for iPhone application for my new phone (yipee!) last week. I tested it out by immediately downloading this book on it's release date.

Plus it had great buzz surrounding it!

The only downside to the Kindle reader? Not holding an actual book in your hands and seeing that AMAZING cover up-close!

Now on to the book. Here is the cover blurb:

For Nora Grey, romance was not part of the plan. She's never been particularly attracted to the boys at her school, no matter how much her best friend, Vee, pushes them at her. Not until Patch came along.

With his easy smile and eyes that seem to see inside her, Nora is drawn to him against her better judgment.

But after a series of terrifying encounters, Nora's not sure who to trust. Patch seems to be everywhere she is, and to know more about her than her closest friends.

She can't decide whether she should fall into his arms or run and hide. And when she tries to seek some answers, she finds herself near a truth that is way more unsettling than anything Patch makes her feel.

For Nora is right in the middle of an ancient battle between the immortal and those that have fallen - and, when it comes to choosing sides, the wrong choice will cost her life.

What did I think?

Patch is a gorgeous, delicious, fallen angel with deep, dark secrets. He is creepy and scary, yet the romatic suspense keeps you wanting more and more of him.

I finished the book in three days time.

Is Patch to fallen angels what Edward is to Vampires? I think so...I also can't wait to read another angel book called FALLEN.

Does Patch take Edward's place in my heart of hearts?

Well... My heart still belongs to Edward and my zombie protagonist, Hayden--they are in a dead heat.

Love the book reviews. I have been in mourning ever since I finished the Twilight series. I need a new good book to suck me in like those did.
Thanks
Rachel

looks good- I'll look for it!

I keep hearing about this book. It sounds really good.

Thanks for the shout out!!! Great review! I just saw a great display at the Eton B&N.

Great review. I don't have a kindle yet and am reluctant for the very reason you listed.

ohhh good review! sounds like a great book! but you know...i just love holding a book...i don't know if i could get into the whole kindle thing...

Interesting. I will have to download this, too. Thanks!

Every time I walk by the mini display we have of this book in the store, I think "I need to put this on my to read list." I am going to check it out after I return the new Ace of Cakes book I checked out last week! Been hearing lots of good buzz about this particular book.