What's In a Name?

...Not much, as Juliet so eloquently pointed out. And yet, so.very.much, depending on how you look at it.

I can think of some stand out characters' names I will always remember: Katniss Everdeen, Holden Caulfield, Harry Potter, and on and on. Which bring me to the topic of this post.

Do you have an interesting story about how you got your protagonist's name? 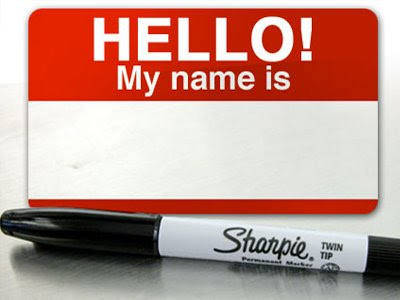 I was out with my two girlfriends at a bar/restaurant, drinking wine, and having a good 'ol time. We got on the discussion of how YA books introduced lots of first loves.

Out of the blue, I asked them what their first loves names were. My first love's name was not so remarkable. Actually, it was kind of funny-sounding.

Anyway, my one friend told me her first love's name.

So, Callen Frazier became my protagonist in HANDS TOUCH.

I told my friend I was using the name and we had a good laugh. When she found out I had an agent and was one step closer to *fingers crossed* publication, we had another good laugh.

Then it got weirder. She mentioned she and Callen recently found each other on Facebook and caught up on their lives: marriage, family, etc.

She told him that I was writing a YA book and was using his name (but spelled differently).

His response? A total Callen response. "Cool with me!"

So thank you, real Callen, for letting me use your name.

This is a great story. Love it!

Wish I had something as cool for my characters. All of their names just popped in my head. Boring I know.

That is a very cool story!
I use musician names a lot in my stories. Just the first names. But no cool stories there!

For my latest story (coming out in Woman's Weekly in the UK on November 2), I got the name of the love interest from a minor league baseball game. We were watching the San Antonio Missions play and Sawyer Carroll stepped up to the plate. PERFECT! I also took a program home with me to see if I could mine it for any more cool names.

That's awesome! I love that he's totally cool with you using his name. I'll have to ask my friends about their first loves... :)

That is so cool. I love the name Callen and Callen Frazier. I want to read this book now!!! You're so right, a great name is so important.

Your lucky he didn't ask for a percentage -- seems what most folks do, today!... It's funny, but over the years, I can almost tell when an author was born by the names of their characters... when writing stories, I try to create names that define the character but done phonetically... Not always successful, but it sits in the mind until the lightbulb shines and just the right name pops up... Come visit when you can...

I actually had a children's series author ask me about using my name in it's entirety (Indigo Sage Ravenwood). He thought it would make a great name for a native focused book he was working on. I had to decline the offer, seeing as I plan to get published myself one day. How weird would it have been to have a character penning a name. (Hugs)Indigo

Cool! SO many names to come up with if you write more than one novel. I usually just have a name pop into my head that fits a character, but last names are tough. There's some site that pops up on Google when you type in surnames that lists the top 4000 surnames in the US or something like that...so I usually grab one from that.

Oooh, fun! I usually stay away from real people names because I don't want to bias my characters with any "real" stuff, but when I hear a random name I like to snatch it for the name book!

Choosing names is so much fun. Often, I play around with baby name websites to have names that have certain meanings/hints for the character and/or manuscript.

I think a character's name has to feel right for me. I usually use bookmarker names until the character picks their own. I do like Callen though.

That's so cool! I wish that I had a cool story about the names of my characters....but I didn't even name my characters. They just popped into my heads with names.

Callen IS a really hot name! Nice score there :)

Hey, that IS a cool real name! Callen. I like the sound of it. And I like the story behind it too. :) I don't really have stories about particular names, but I do think a lot about what to name people. I like names with meaning or with some sort of character significance. Like, I have a sort of family line of characters who all have Sun related names.

I will look up baby names to get a name for my characters. I have also thought TV shows I watch and list the characters and the actors names: i.e. Jack Bauer/Kiefer Sutherland. Also do that with movies. But the one that stands out is Ben. Why I can't remember his last name right now is beyond me. There is no tie or connection. It just came to me. Ben. We saved all my stuff to my hubs computer and that is where Ben is sitting and waiting.