In the book THE FIRST FIVE PAGES, Noah Lukeman says if there is even one extraneous line of dialogue on the first page of a manuscript it's a clue there's lots more to follow. And more than likely will result in a big fat REJECTION for the writer. 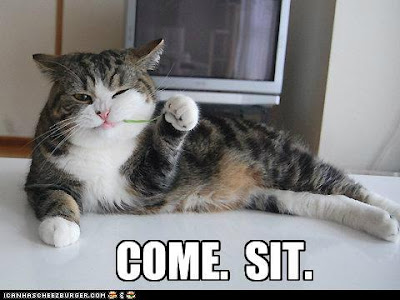 Here's one scene he uses as an example that made me laugh.out.loud (and pray my very first manuscript didn't look like this):


Heh heh. Of course, I know we're more seasoned writers and would set the scene up differently. Maybe Dave limps in, pants torn at the knee, and right off the bat groans, "I just got hit by a car."


Despite being much better at dialogue than when I first started out, I still find extraneous words that weigh it down.


Here are my culprits: SO, THAT, WELL, OKAY, EVEN, LISTEN, ALL RIGHT, JUST.


I go through and cut, cut, cut. It makes the dialogue flow and gets right to the point.

I've learned about those little culprits and I too go throughout my manuscript and adjust. It isn't easy, somehow you always find one that doesn't belong. Those little stinkers take the creativity and beauty out of a sentence.

Good thing we're here to take our creativity back!

That example cracks me up. Those words are such sneaks. I know them well. :) Thanks.

I can't even count how many "I think" and "I mean"s I've removed from dialog. People may say those things sometimes, but not nearly as often as I write it.

Ha, that example made me laugh out loud! I'm definitely guilty of extraneous words in my dialogue. They're just so sneaky sometimes!

I seem to have a new list of no-no with each ms. I write 'I think' a lot, but it's easy to delete.

Wait? You mean that example is wrong?

I think my bigger struggle is the stuff that happens between the dialog. The dialog tags, the action to move the scene forward, etc.

I hear you, JEM. Pacing is tough!

I definitely have words that I fall back on way too much. I'll have to skim through and eliminate probably about 3/4 of their usage. I think we're probably all guilty of this in some form or another :)

I don't think I've ever seen being hit by a car talked about so non-nonchalantly. *yawn* :)

Unlike lawyers, we don't get paid by the word... great post! Come visit when you can!

I write fat in my early drafts. I go through each successive one with a scythe.

Call me the Grim Reaper of Excessive Dialogue, Unnecessary Modifiers, and Repetitive Reflections.

HA! What if one of our children came up to us and after all that nonsense talk said he got hit by a car nonchalantly.

Too funny! I find that I use "so" alot when writing my blog posts...I have to stop!

I'm definitely guilty of but. But sometimes it's necessary! But probably not as often as I think. But I'll learn eventually. :D

Dialogue is always a challenge. My writing partner once gave me the best advice about it - and that was to listen to the characters have the conversation in my head first, then write it down. Good post Christina!

Agreed. One thing I've recently discovered about myself is that I recognize those unnecessary words or phrases and don't seem to cry when I cut them. When I first started writing, cutting a words was almost like cutting my arm off. So foolish. lol