Three reason Why I Love: Dexter 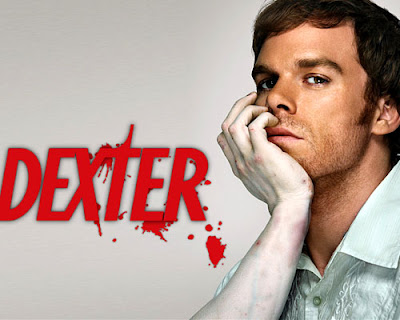 It's on Showtime (which we don't suscribe to) so we've been buying the DVD's. We are currently on season 3!

1). I have a thing about humanizing bad guys (thus my zombie novel). Probably why I also loved and watched every episode of The Sopranos. Dexter is a serial killer, who happens to work at the police department as a blood splatter expert. He lives by a code, and only kills (and dismembers-yikes!)other bad guys- and somehow the writers just get me rooting for him every episode.

2). I love Michael C. Hall who plays Dexter. I watched him on Six Feet Under on HBO (one of my top 5 favorite shows of all time-do you detect a death theme here?). There is something quietly sexy about him. 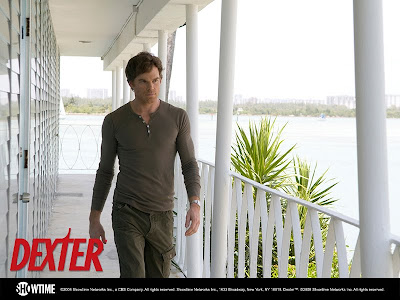 3). Jennifer Carpenter who plays his sister in the show (also his wife in real life) says F*** in every sentence she speaks and is totally flawed in her own way. She cracks me up and is a very strong woman character- I love that. 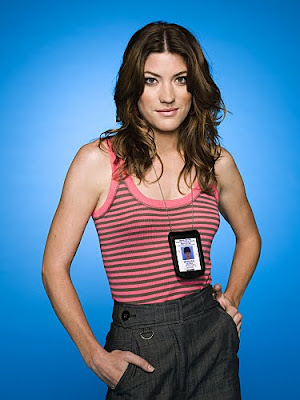 And oh yeah- it's based on a series of books- which I have to read- even better!
I don't know anyone else who watches this show- but there's gotta be other fans out there- anyone?
Posted by Christina Lee

Can't share the love of the show with you especially since #1 kind of creeps me out. I think the word dismember did it for me. YIKES!

Hi from SITS! I just saw a link to your post "10 things I love about Target" now THAT I can totally relate to! :)

i love love LOVE Dexter! My husband and I just finished watching the 3rd Season last week and we're thinking about starting over from the beginning because we like it so much. Dexter might be the first TV character that I've ever actually cared about (not in a creepy way, just in a "I can't wait to find out what you do in the next episode way). Yay Dexter!

Me, me, me!! I watched the first season when they aired episodes on CBS during the writer's strike, and OMG, I was hooked! We don't subscribe to Showtime, either, so I have to rent the sets or find them at libraries. I just watched Season 2 last week, and I'm waiting for someone to give up the reigns on Season 3 so I can watch them!

I also finished the first Dexter book last night, and it follows Season 1 pretty closely, up until the last 20 pages or so. I think the show actually did a better job with the storyline than the book. Starting the secong book tonight, then the third (which friends tell me is not the best), and awaiting the fourth book when it comes out next week.

I love Michael C. Hall. He's the perfect level of creep and cool, and seriously, check out that form in the second photo you included. The man can wear a shirt!

I don't have Showtime either but I would actually prefer to watch this stuff on DVD. I did find, though, that watching it altogether like that really burns you out on a show. To this day, I won't watch House because I watched two seasons all the way through and got to the point where I'd had enough.

I've never heard of it, but it sounds like it's right up my alley!

me and my boyfriend started the 1st season, i kind of feel of the bandwagon, but he still watches it and loves it!

and i love dexter, he is just one fine piece of man
haha

i've heard people saying they're obsessed, but i've never seen it. but then, i don't really watch tv!

I'm too much of a wuss! I can't take all the blood and guts, but I did really enjoy the first season. Great writing.

Haven't got to it yet but spouse and I LOVED Six Feet Under (own the whole thing on DVD). We've decided to watch Dexter on DVD once we've got through all of The Wire!

I have never watched Dexter, but, have had sooo many people tell me that it's great. I loved Six Feet Under. Guess I'm going to have to rent Dexter and find out what I've been missing.

Stopping by from SITs to say hello! Really enjoying your blog so far, can't wait to read more.