Two books I recently read had popular mean girls in them.

One was SOME GIRLS ARE by Courtney Summers: 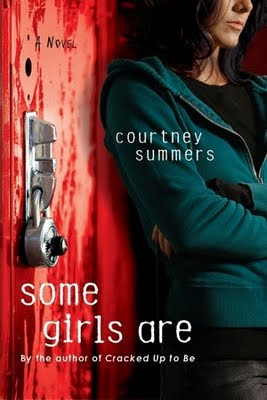 Climbing to the top of the social ladder is hard - falling from it is even harder. Regina Afton used to be a member of the Fearsome Fivesome, an all-girl clique both feared and revered by the students of Hallowell High... that is, until vicious rumors about her and her best friend's boyfriend started going around.

Now Regina's been "frozen out" and her ex-best friends are out for revenge. If Regina was guilty, it would be one thing, but the rumors are far from the terrifying truth and the bullying is getting more intense by the day.


She takes solace in the company of Michael Hayden, a misfit with a tragic past she herself used to bully, friendship doesn't come easily for these onetime enemies, and as Regina works hard to make amends for her past, she realizes Michael could be more than just a friend... if threats from the Fearsome Foursome don't break them both first.

Tensions grow and abuse worsens as the final days of senior year march toward an explosive conclusion in this dark new tale from the author of Cracked Up to Be."

*****
The other was BEFORE I FALL by Lauren Oliver: 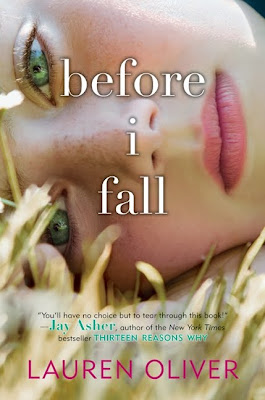 What if you had only one day to live? What would you do? Who would you kiss? And how far would you go to save your own life?

Samantha Kingston has it all: the world's most crush-worthy boyfriend, three amazing best friends, and first pick of everything at Thomas Jefferson High—from the best table in the cafeteria to the choicest parking spot.

Friday, February 12, should be just another day in her charmed life.

Instead, it turns out to be her last.

Then she gets a second chance. Seven chances, in fact.

Reliving her last day during one miraculous week, she will untangle the mystery surrounding her death—and discover the true value of everything she is in danger of losing.

I loved both of these books for different reasons.

One thing they had in common was that I couldn't stand either of the main characters in the beginning of the book. Especially Regina. HATED HER!

But somehow, by the grace of great writing, I kept chugging along devouring EVERY PAGE.

And by the end, I ended up liking both protagonists.

HAVE YOU EXPERIENCED THAT WITH A BOOK? WHICH ONE?

I have only had the pleasure of reading before I fall but I must admit that I agree with you completely, I was not a fan of her at all at the beginning and grew to like her by the end... not love. It was worth reading, I loved the book but it was hard to stick with it and wait for them to turn out nice!

I'll have to check the other one out though, I'm curious to see how it goes!

they sound like good summer reads, even for my teen! I'm adding them to the list for us.
stopping by from sits!

I would say one of those books was "Eat, Pray, Love" by Elizabeth Gilbert. She wasn't mean or anything...jut annoying! But I admit, I still didn't care too much for her in the end either!

I have a hard time reading these kinds of books, probably bc my highschool years weren't the most fun, but I keep hearing about both of them--especially BEFORE I FALL--so I'll have to check them out.

Thanks for the reviews!

I've been curious about Before I fall so I think that will be amongst the next "to read" pile. Um have I disliked a character then ended up liking them... no I don't think so, I usually stay in the "I don't like them...love them...like them okay...hate them" category. Maybe I just haven't run across a book where a character evolved so much that I changed my mind.

I've heard about these books. Thanks for the review. I'm going to order for my summer reads. Yeah, love summer for reading.
mary

I haven't read either, but I'm tempted. I too have a hard time reading about girls I don't like and I hold grudges!

Uhm....hello! Those are two of the best books I've read this year! Love them (but agree, I don't really like the main characters!.

I've got Before I Fall waiting on my bookshelf to be read. May have to bump it up the list now. :)

Mean girls suck. I hope I am done dealing with them, but I know that is a pipe dream at best. That book sounds like a good one. Actually, they both do.

I'm looking forward to reading both of these. I lved Courtney Summer's first book, Cracked Up to Be.

I'm falling behind in my reading. They are both on my list.

I've heard so much about BEFORE I FALL. Alright, already. I'm buying it...

I've been meaning to grab "Some Girls Are" from the shelves when I've been at work. I must actually write it down on my 'to read' list so I don't forget now!

Um...is it safe for me here to say I hated the character of Bella Swan in the two books I read, and I NEVER got over that hate? Because yeah, no...

Also, I hate the character of Lisbeth Salander in the "Girl with the Dragon Tattoo" and "The Girl Who Played With Fire". Not a 'mean' girl, per say, but just not a likable, make me warm up to her character, either. In fact, I haven't been a huge fan of either book, either, but when the final one comes out next Tuesday, I'll end up reading it because I feel like I should now!