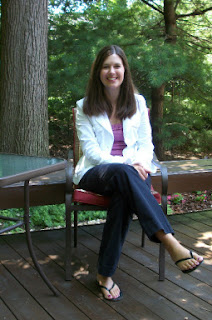 I just read SEEING CINDERELLA, by Jenny Lundquist and HAD to tell you about it! 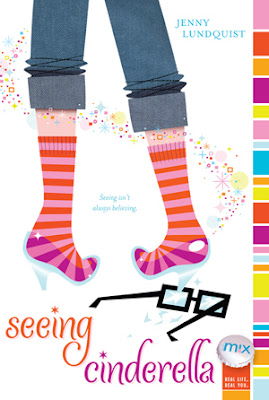 Below are my Top Five Reasons To Read This Book:

1. The Premise: Calliope Meadow Anderson (“Callie”) finds out she needs glasses.  Her new frames are hideously large—a total nightmare, except for one cool feature: When Callie wears them, computer screens appear over everyone’s heads, revealing their innermost thoughts!  Suddenly, Callie knows what her best friend, secret crush, and locker partner REALLY think about her.  Sometimes, that’s not a good thing.

2. Callie’s new friend Ana: She definitely has something to hide. But even with her super freaky glasses, Callie can’t decipher Ana’s thoughts, since the words on Ana’s computer screen appear in her native tongue: Spanish.

3. The Cinderella Metaphor: Callie auditions for the lead in her school’s production of Cinderella.  But when she gets the part, she gives it to her best friend Ellen. It’s easier to be the understudy and avoid the spotlight.  Isn’t it?

*Super Freaky Glasses Rule #9: It’s Easier To Dislike Someone When You Don’t Have To Read Their Thoughts.

5. The Lesson: (from p.213) “One thing the glasses taught me: No matter how different we looked on the outside, on the inside we worried and wondered about the same things. We all hoped we’d find someone who would see us for the person we really were, and the person we wanted to be.”

Jenny is represented by Kerry Sparks of Levine Greenberg Agency. Seeing Cinderella will be published by Aladdin M!X in the Spring of 2012. (On-Sale Date: 3/20/2012).

***Jenny is also doing a giveaway of an ARC and funky socks on her BLOG this week. All you need to do is leave a number between 1 and 225 in the comments section! The contest ends this Sunday at midnight.

I might have to get this for my daughter. She's a little young for it, though. but she might need glasses.

Great idea, Stina! Maybe stef can speak to how young or old the book may be...

The book is written for ages 9-13. My 4th grade daughter is loving it!

This does sound fun! I don't know that I'd want to know what others are really thinking.

Pam, just FYI, the number needs to be left on her blog comments! :-))

Seeing Cinderella sounds great! My 11-year-old niece will love it. I'll have to pre-order it for her birthday in June.

Aw, this sounds like such a cute book! I definitely need to read more middle grade. :)

I don't read a whole ton of MG, but when it really shines, it's like nothing else.

you made this book sound so interesting I just went over and commented. And I may just have to buy it anyway for my niece who is soon to turn twelve. Thanks!

That is an amazing premise!!! I am definitely putting this on my TBR list! (and for my daughter!)
Thanks for the great review!

hey, what a fun-sounding book. For some reason, books/movies with "rules" always appeal to me... must self-diagnose now. :D <3

Thanks, Stef! (Wave to you too!) Great review!

Oooh! I like this story....I bet my little middle would love it. Need to write this down.