1. I was secretly glad that John Mayer F***** up in his article with Playboy magazine. He was getting too big for his britches and needed to be knocked down a peg. Everybody needs that, from time to time. So Mr. "my penis is a racist" douche bag, shut the F up and go make good music from this experience. 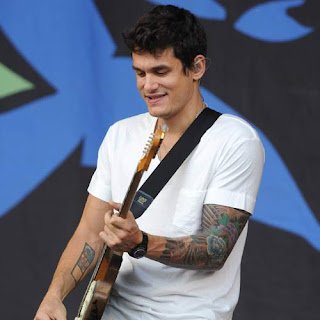 2. "Jon Benet Ramsey" type stuff scares me. Not only is that one reality pageant show really scary, but any young girl dressing and acting older is. Check out Miley Cyrus' sister, Noah (in all fairness I think this is a Halloween costume, but STILL). She and Miley will be doing a lingerie line for girls aged 9-14 for Ohh La La Couture. WTF??? Just YUCK! 3. I have a secret crush on football player, Reggie Bush. You know, Kim Kardashian's boyfriend? Seeing him win with the Saints at the Super Bowl was super eye candy for me. I wanted to slap his firm a**. I think it was this GQ photo shoot that sealed it for me. 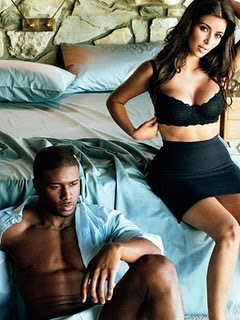 4. I equally have a crush on Paul Wesley from Vampire Dairies. Plus he's also Jack Bauer son-in-law on 24. So sometimes I get to see him two times a week. YOWZA! 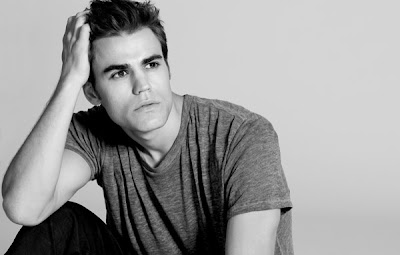 5. Sometimes I suffer from extreme mommy guilt. Take yesterday for example. We walk to and from school most days. I warned my son to stay on the plowed sidewalk and to refrain from any snow piles because cold snow would get inside his boots. Apparently those kind of warnings don't work well on five-year-old boys.

By the time we got in close proximity to the school he was openly crying about all the snow that was in his boots and how cold he was. Where did my guilt come in?
I didn't think to pack an extra pair of socks in his book bag with the sneakers he'd be changing into. Yeah I know all about natural consequences and the whole "he'll learn his lesson next time". And that wet socks were "not going to kill him".

Not only that, I was all "mean mommy" and told him to get up and get moving after he sat his little butt on the ground and cried. 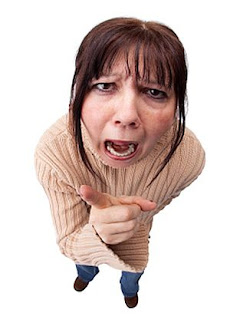 Boy, I carried that sadness and guilt around all day until he came out of school and I saw that he was fine. Please tell me you do this too.


What do you need to tell the truth about today?

Email ThisBlogThis!Share to TwitterShare to FacebookShare to Pinterest
Labels: tell the truth

1. I am enamored by Ian Somerholder. I only watched Lost because he was on it. When he was killed off I gave up the show. Now I get to see him on the Vampire Diaries. I was soooo mad last Thursday to discover that I have to wait til March 26th to see a new episode.
2. I get WAY to much enjoyment from watching my 3 legged cat play with twist ties. There's just something funny about it.
3. I watch the show Hoarders because I am a little afraid that my slovenly 12 year old is going to turn into one. I am hoping to garner some clues about how to change her path.
4. I really love Jim Parsons from The Big Bang Theory. I love his character Sheldon, he totally cracks me up but I think it is really a love of Parsons that causes it.
5. I feel really guilty because my hubs was a little under the weather on Valentines day and that totally spoiled my plans :o(

Cassie these are GREAT--you obviously need to write your own post! I was suprprised when I saw Ian this season in a flashback scene on Lost. He is hawt too. I think I would have a bigger crush on him if he brooded more like Paul--LOL!!

I hated the Twilight series. Only kept reading because I reading ahead of my then 11 yo.


Yes I do that mommy guilt thing too. Sometimes it seems verifed- take last week for example. The Thursday morning before I brought Shaye in for a strep test, rapid test cam back neg. She seemed better by Sat- well, enough to spaend all weekend doing the fun things we had planned - like going to the SCHOOL carnival. Mon. morning comes and she is crying how sick she is please dont send her to school. No temp., no strep (I would have heard by the docotrs by now surely) , so I stand with my sobbing daughter at the bus stop and make her get on.

Five minutes after returning to my house (feeling bad, but resolved) the phone rings. Shaye's culture came back positive. I burst in to tears and sobbed to the receptionist that I was the worst mother in the world. She was like, um, yeah, so we called in a prescription and hung up.

Did you hear John Mayer's apology at his concert for what he said to Playboy? Puss!

I used to live outside of Denver. Is it creepy that I drove by the Ramsey's house, just to see it? Also those little pageant girls are scaaaarrrrry! But a lingerie line for 9-14 year olds? Are Hanes not enough? Uh, Noah looks like a tramp even if it is Halloween! Is she supposed to be a skanky Minnie Mouse in that left photo?

I screwed up with Vampire Diaries. I watched the first 3 episodes and then I lost track and now I'm screwed. Paul Wesley is hawt!! And total bonus for you seeing him twice a week! Now that I know the show is off air until the end of March, maybe I can make a comeback. OH and the dude from LOST..... Hello cutie pie!!!

Mommy guilt? 24/7. Yesterday I laughed uncontrollably while my son tried to get his straw into his Capri Sun while we were driving to school. To the point that I though he was going to punch me. I'm glad he didn't.

Wow... Great post! Thanks for making me smile so early in the morning!

Mommy guilt? Never heard of it. TOTALLY KIDDING!!!! I feel it every day. And I vacillate between the "let them learn for themselves" and being "overprotective." You can't win no matter what you do.

And John Mayer does need to get over himself a little bit. Love his voice though.

And the whole little girls dressing like sluts is horrific and disturbing. Makes me stick to my stomach. And I can't believe someone things a lingerie line for young girls is a good idea. That is just asking for trouble. So wrong.

I have mommy guilt at night after my son goes to bed. I think back to all the times during the day he wanted me to dance, play Transformers, bop a balloon around, tickle, etc., and how many times I said, "Wait a minute," or "Not now," because I was busy (sometimes busy on here). I feel incredibly guilty every night and swear the next day I won't touch the computer, and I'll play anything he wants to play.

I'm also very relieved to have gotten my period this morning, after acting like an oversensitive lunatic last night. I thought I was just losing it. You'd think after 18 years I'd know to keep track of it!

Gina, Awww that's hard (but I've done it too.

Pamela, you're a crack-up!

Lisa--wow, YES I think about those things too, ALOT!

I've never been a John Mayer fan. I've tried to get what it is about him, but I just haven't been able to. I did read the fall out of his interview, and watched a YouTube clip of his apology at a performance, and I guess it seemed sincere, but when he says he's done with the media and dropping soundbites, I guess we'll have to wait for the pudding to see if there's any truth in it.

I hate John Meyer, started out loving his voice on "Your body is wonderland" but he kills it with his cockiness....

Miley and her family--don't even want to go there-it breaks my achy breaky heart.

This is great!! I am sooo with you on the John Mayer thing. Dude is a complete a**! He needs to get knocked down several hundred pegs if you ask me. Also, it's funny you should mention your secret crush is Reggie Bush, because my secret girl crush is Kim Kardshian...or maybe I just want "to skin her and wear her like last year's Versace"! Lol! I feel silly saying it, but it's Tell the Truth Thursday ;o)

Love John Mayer - but he needs to keep his mouth shut unless he's singing!

Baby beauty pagents - totally freak me out too!

And yes I carry guilt around like that...I think it just makes us better mothers!

The only person here who should have Mommy (and Daddy) Guilt are the parents of the girls who let their daughters dress this way and let them design a lingerie line for 10-14 year olds.

Oh yet another blog asking for the truth, the honesty. It is in my face today! Mommy guilt. Part of the title. Period.

Ben loves John Mayer's music, but I think he's just such a narcassistic jerk. And those beauty pagents? They get my blood boiling! That's so disgusting to do that to young girls.

Hey Chica!!!
Love your blog..and to Mr Reggie...you are some hott stuff!!

Those are good ones. I watch the reality show and it's pretty sad.
Why would kids need a lingerie line?

I am so putting extra socks in both of my boys' backpacks for their snow filled boot days! You can remove your guilt now because you helped another mom not endure mommy guilt (it works that way right?) My husband calls these kind of tantrums "learning" but I'm not so sure the lesson gets in. Spring is just around the corner, fear not!

Mommy guilt rules me sometimes. I have all kind of crushes...Josh Holloway comes to mind instantly. *sigh* there is more...much more...haha.

Those dress up pictures are ridonkulous. But I have to say, I'm equally disturbed by the whole princess movement--little girls obsessed with Disney Princesses when they are as young as 3 doesn't sit well with me for some reason. I guess I want my daughter to strive for more than just princess-status.

And yes, I have Mommy guilt quite often. When my daughter swipes at my computer I feel like I'm scarring her for life when I work during the day. But then I remember that back in the day, people used to tie bells on their kids' shoes so they could hear where they were in the house. I feel better then.

Eww. Lingerie for kids. Shame on parents who will buy it.

May you have a guilt-free Friday. Does that happen?

I think Mommy guilt is only natural. I'm not a mommy but I already feel bad about the things I might mess up when I finally have kids. That is one thing that's stopping me from agreeing to have them, I suppose. Haha

ug, sometimes i feel that's our only role in life...let me read you a story and send you off to bed lol.